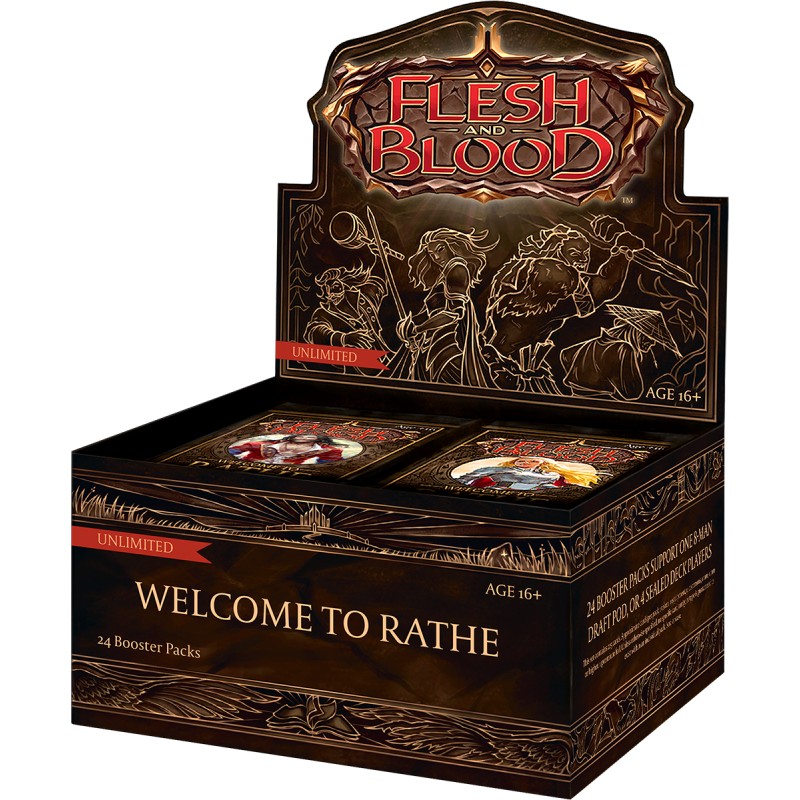 After centuries of uneasy peace, the land of Rathe balances on the brink of war once again. Savage beasts emerge from the primordial jungle, clashing with noble warriors in increasingly violent skirmishes. A forgotten realm finds its ancient barriers eroding, exposing it to the greed of others, while a mystical land is faced with the history it once tried to bury, threatening to expose the secrets of their ancestors.

In a world plagued by conflict, you must fight for the chance to determine your fate. Will you succumb to the machinations of others, or will you choose your own path? Pick up your sword and prepare for battle; for no matter where you run, war will find you.

Welcome to Rathe (WTR) is the first booster and hero deck set for Flesh and Blood, releasing in Local Game Stores across USA, Australia, and New Zealand. Unlimited Edition will mark the official launch of Flesh and Blood in Canada and some European territories. More details on this in the coming weeks.

Flesh and Blood has been crafted with collectability as a core tenet. One of the ways we want to honor this, is differentiating between the first and subsequent printings of a product. The first printing of Welcome to Rathe, which released October 11, 2019, is distinguished by an “Alpha Print” badge on the back of the display box. The first printing of Arcane Rising, which released March 27, 2020, is distinguished by a “First Edition” badge on the back of the display box. The same is true for Crucible of War and other boosters going forward. Unlimited Edition packaging has a red UNLIMITED flag on boosters and displays.

What Unlimited Edition doesn’t have is Cold Foils.

Cold Foil is a special printing technique that Legend Story Studios developed the application of to showcase the most special and unique cards in Flesh and Blood. We are thrilled that Cold Foil has been so well received by fans around the world, and are proud to have brought this special printing technique onto the global TCG stage. The presence of Cold Foils is the subtle but meaningful differentiation between the First Edition and Unlimited Edition print runs. Owning Cold Foil cards is intended to be a point of pride for the early adopters of Flesh and Blood, and something that collectors will chase many years into the future. Cards that feature as Cold Foil in their original print, will instead be found as rainbow foils in Unlimited Edition boosters, and we assure you, these cards look beautiful as rainbow foils.

The review has been correctly sent
Rapide