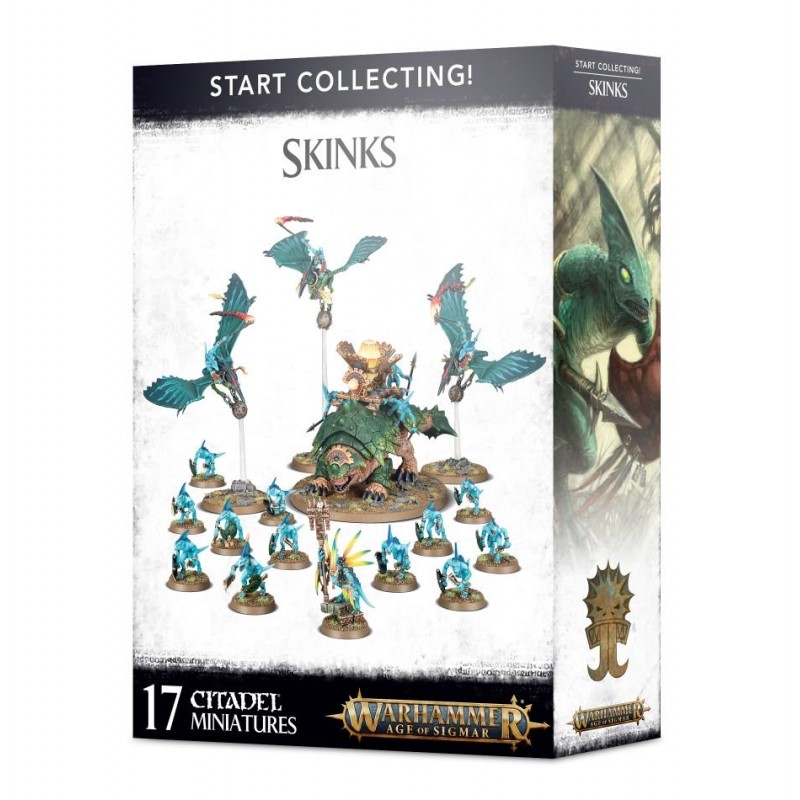 CHF96.90
Key Features The perfect way to start an army of Skinks! Contains a wide variety of units Save Money Compared to Buying Kits Separately Read more
In stock

Read the review
Average rating: 5/5 Number of reviews: 1
The Skinks! We have to love them. These little lizard men are appreciated by generals for their speed, historical enthusiasts for their cunning, and figurinists for the inexplicable affection they arouse. So we've made it easier than ever for anyone who wants to make it an army. The Start Collecting Box! Skinks simplifies the beginning of a Skinks-based seraphon army. You'll find a Skink Starpriest to frame your forces, a unit of Skinks snipers to go for reconnaissance, 3 quick Terradon Riders (to be assembled as Ripperdactyl Riders!) and a Bastiladon, a kind of laser-carrying dinosaur. Is there a need to say more? To convince you, the box is cheaper than its separately purchased content, and it contains an exclusive battalion charter! This box contains: 1x Skink Starpriest 12x Skinks, with various weapons and equipment options, including meteoric javelins, stellar rounds, celestite daggers, spit-traits and 3x Terradon Riders lunar stone clubs, with as an alternative mounting 3 Ripperdactyl Riders, or a Terradon Chief, or a Ripperdactyl Chief 1x Bastiladon armed with your own a Sotek Ark or a Solar Machine This kit is provided in 272 components , plus 1x large oval base, 3x round 50mm bases, 2x round 25mm bases, 12x round bases with 25mm slit, 2x kneecap rods, and 1x long flying rod.

The review has been correctly sent
Objet conforme