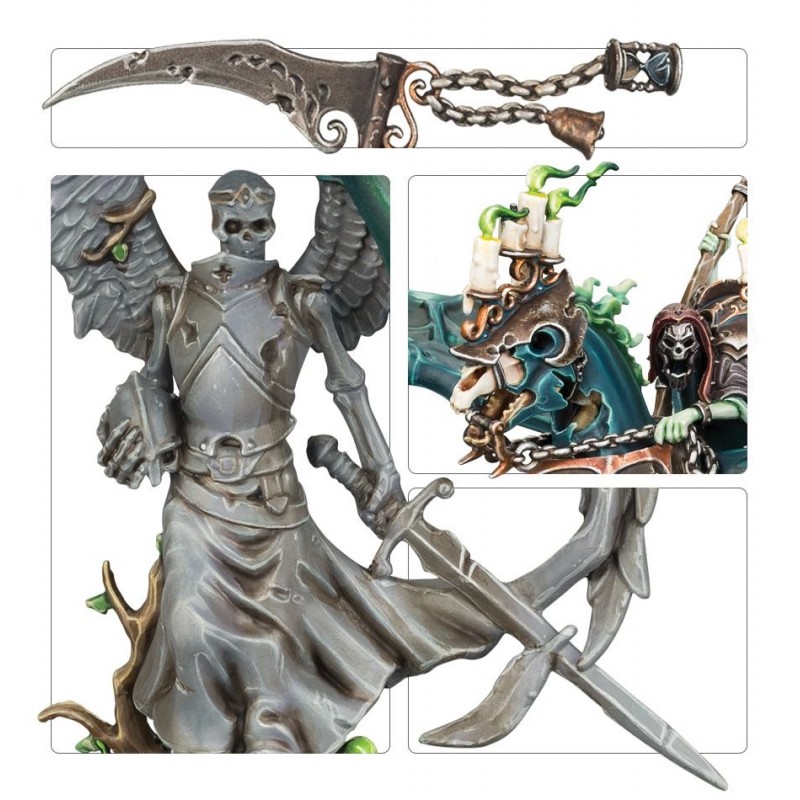 CHF38.90
Key Features Nagash's Soul Harvester, a sinister and powerful sorcerer's spectrum He dives high to complete the revenge of the Great Necromancer Figure to nest molded in turquoise plastic - no need for glue! Learn more
In stock

A witch king who was versed in the magic of amethyst during his lifetime, Reikenor opposed Nagash. Now undead, he is the Dark Song, condemned to serve the Great Necromancer as the leader of his reapers of souls. Few shows are as sinister as the sorcerer's spectrum riding his winged mount by the light of his candles of corpses. Thanks to his incantations, Reikenor can summon a spectral storm- a cyclone of amethyst magic that stirs up souls recently torn from their bodies. His fate prompts them to attack their former comrades. It creates a spectral hurricane in which ghosts weaken and lace the living. Thus Nagash's vengeance is exercised on those who annoy him. Designed to be as easy as possible for new hobbyists while being detailed enough to appeal to the most demanding veterans, this kit allows Reikenor the Grimhailer to be mounted on its mount, the Nightmare Kyallaron. To be followed, without necessary bonding, it is disarmingly easy to assemble and it is molded in turquoise plastic. Reikenor the Grimhailer is a sinister, aggressive and impressive Nighthaunt figure. His ethereal figure is covered with a ragged cape, under which one can glimpse a skeletal mask, and malling arms that tighten his weapon - a large forgery named Hardfuche, equipped with a chain and an hourglass filled with sepulchral sand - as well as the reins of his mount, a Nightmare named Kyallaron. It is a majestic destrier despite its cadaveric state, with ragged wings and the impression of great physical power, even if its ribs shine through just like the bones of its limbs. His caparaçon is lined with candles made of remains of corpses, just like Reikenor's armor, and the figurine as a whole seems to melt on a cemetery scene, supporting a sinister winged skeleton statue. This kit comes in 11 components, plus a 75mm Citadel scenic oval base.