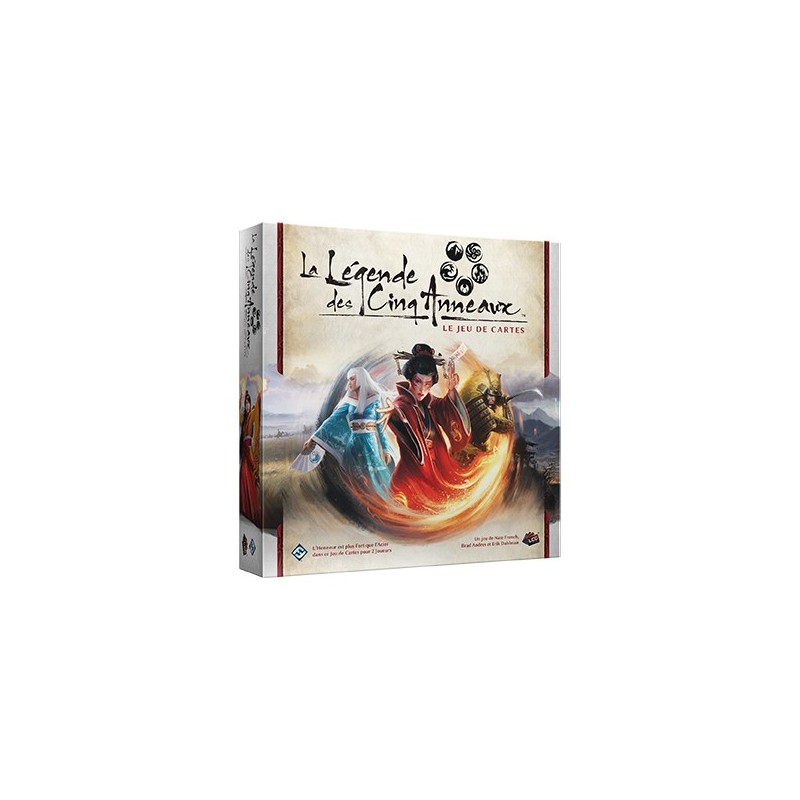 The Legend of the Five Rings - The Card Game

Take on your opponent without losing your Honor!
From the Underworld to the south to the Burnt Lands of the North, from the Twilight Mountains in the west to the Spice and Silk Islands to the east, lies Rokugan, the Emerald Empire, reigning for more than a thousand years thanks to the seven great clans that serve the Emperor. Guardians or politicians, clans play a specific role in society, and are as varied as they are powerful. But all must respect the same code of honor, the "way of the warrior", the Bushid. Honor is the core value to Rokugan, and an inappropriate remark can be more dangerous than the blade of a sworn enemy.

This tense environment that the seven clans face. From the ancient rivalry between the Crane and the Lion to the daily skirmishes between the Crab and the forces of the Underworld, constantly threatening to spread over the lands of Rokugan, the smashing of swords and the murmurs of politicians make the daily life of the Empire.

But the conflicts between the clans that have dominated Rokugan for more than a thousand years will have to wait, for the real threat is there, lurking in the darkness, unbeknownst to all. The balance between the five elements of Air, Earth, Fire, Water and Void has become precarious, and the lands of Rokugan threaten to descend into chaos...

----
Each player directs his forces with two separate decks: a Dynasty deck, which populates his provinces with characters and properties, and a Conflict deck, including tactics, maneuvers, partisans and props that can be used to regain the upper hand and establish his supremacy in a fight.
During the games, players will compete in political and military conflicts, with the aim of conquering their opponent's strongholds to achieve victory. But the rules of society are absolute, and clans must never forget the principles of the Bushid, otherwise their selfish quest for glory will lead them to their loss...
The basic game of The Legend of the Five Rings: The Card Game includes everything you'll need to explore Rokugan's seven great clans: the Crab Clan, the Crane Clan, the Dragon Clan, the Lion Clan, the Phoenix Clan, the Scorpio Clan and the Unicorn Clan. It also includes many pawns and cards, as well as rule sheets that will allow you to play your first parts of The Legend of the Five Rings: The Card Game.
First published in 1995 as a collectible card game, The Legend of the Five Rings has since been successful thanks to its unique universe, captivating gaming experience and enthusiastic community of players. Newcomers to Rokugan as well as frequent visitors will be able to discover the Empire like never before thanks to the scalable card game format.

The Legend of the Five Rings - For Honor and Glory

The Legend of the Five Rings - In the Forbidden City

The Legend of the Five Rings - The Stained Lands

The Legend of the Five Rings - Destiny Has No Secrets